What’s Love Got to do with Leadership? 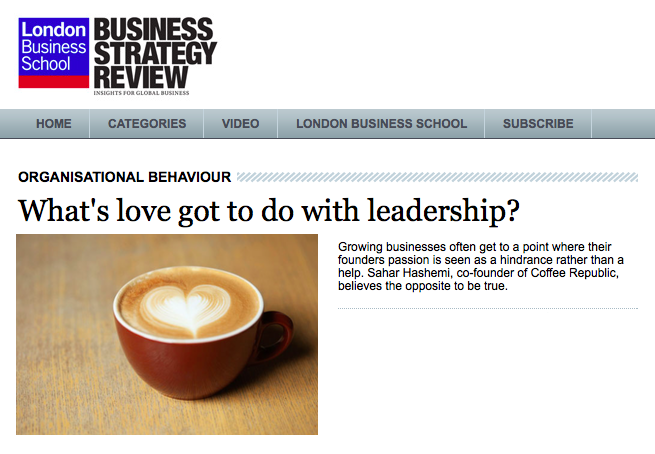 When you love something, you notice the details. In a relationship, that might be a partner’s laugh or particular way of moving. For Howard Schultz, who grew Starbucks from a local Seattle coffee shop into a globe-spanning giant, love was in the details of the coffee-making process — the hiss of the machines and the smell of the beans.

So in 2008, eight years after Schultz resigned as CEO, when the company’s new management replaced hand-operated espresso machines with automated ones that took the theatre and romance out of coffee — basically everything the Starbucks Schultz had built was about — he noticed. And he cared.

How much? First, he wrote an email to the then CEO Jim Donald mentioning the “watering down of the Starbucks brand”. When it was leaked and its recommendations ignored, Schultz returned as CEO. In his own words: “When you love something as much as I love Starbucks, there is a huge responsibility that goes with it.”

Love might sound a flaky topic for hard-nosed business leaders, but there are many similar stories of founders returning to their companies for love — those of Michael Dell and, of course, Steve Jobs, for example. And, on a much, much smaller scale, my own story.

I started Coffee Republic with my brother Bobby in 1995 (before Starbucks hit our shores). I had seen the new-style coffee bars in New York and wanted to have skinny lattes and the muffins I had there in London. We had no experience in coffee or retail, but we went for it and learnt along the way. Our guiding light was looking at everything from the customer’s point of view.

Which was easy because we were customers ourselves. So instead of paying for market research, for every question we asked: “If I was a customer, would I like this?”

With this attitude we built Coffee Republic to 100 stores and were recognised by the Financial Times as one of the brands of New Britain.

But by 2001 we felt the pressures most founders experience. The company was getting big. We had thousands of employees and a market cap of £30 million. In a way, the baby we had brought into the world had become an adult, and the sense we got from the board and the new, more experienced management (with the proper CVs who we couldn’t attract at the beginning) was that we, as founders, had reached our sell-by date. The entrepreneurial phase was over — the time for dreaming and passion was over. It was time to hand over reins to ‘proper’ management.

And so we did. We found a professional, polished blue-chip CEO with a great CV and plenty of experience in retail, and we handed over the reins. It seemed like the wise thing to do — we had got the message from the experienced managers we’d brought in that we were not equipped to run a big company. It felt like a pat on the head and being told: “Good job so far. Just give it to the big boys to run.” We kept our shares and resigned from most positions.